Welcome to MONSTER GUTS, a tabletop roleplaying game, Illuminated by LUMEN, that draws from your favorite monster-hunting video games.

This book has rules to build your scavenger, pick a starting weapon and friendly companion critter, and then go out hunting giant monsters! Each hunt takes approximately 90 minutes.

Set in a post-capitalism world where monsters bio-engineered to extract resources have destroyed much of the world, you must hunt these creatures to sustain your village, one of the few settlements in the Pacific Northwest to have survived. You'll also harvest tags that you can slot into your weapons and garb to power up your scavenger.

As a LUMEN game, MONSTER GUTS focuses on how characters take charge of their environment, using three attributes: CRUSH, SLICE, and PIERCE.

PIERCE governs maneuvers that depend on precision, study, patience, and practice.

Based on your approach, you'll roll six-sided dice and choose the highest one. On a 1-2, you incur a penalty. A 3-4 yields a mixed success, while a 5-6 accomplishes your task. This simple core mechanic and streamlined combat rules lets you focus on the thrill of the Hunt, keeping the action tight and nimble.

MONSTER GUTS launched as part of the Lux Collective, LC (luxcollective.crd.co), a group of LUMEN games that itchfunded Summer 2021. Check them out!

In order to download this LUMEN game you must purchase it at or above the minimum price of $20 USD. You will get access to the following files:

Support this LUMEN game at or above a special price point to receive something exclusive.

Hey, looking through this game a few times, top tier stuff. The first Lumen gane I *really* click with. I plan on running it as is, and I actually want to homebrew/hack it for a home game, straight up monster hunter, which I won't sell or anything out of respect to both you and capcom, if I do shafe it publicly it will be free and with a hefty credit to this game. I will say what I want to do with it though. Add rework the weapons, add more moves, add wirebugs, add switch skills, flesh out a full weapon/armor crafting system off of parts and armor/progression system, add more items and economy, and flesh out the whole Rise roster. So basically adding a ton of non combat-oriented crunch, and a bit of combat oriented crunch. I've wanted to make a monster hunter fan rpg for a while, and I didn't know what to do to get started. This beautiful game has given me a foundation. So I thank you for the game itself, and the foundation which it has given me.

That sounds awesome! I'm so glad you've enjoyed MONSTER GUTS. Please let me know when you publish your game! I'd love to see what you come up with.

Your game is simply amazing and I’m buying as soon as I have funds even though I got a community copy!

I have a question though, when monsters use their attack does it just happen? Or can we roll to get out of the way?(this is how I’ve been playing)

I'm so happy to hear that!

Up to you, as long as its consistent! When I run it, monster attacks are usually consequences for failed rolls, so they just happen, and monster attacks on the GM turn work the same way, but it's important that you play the way that feels best to you!

Yoinked a Community Copy, 5/5 i love it!

Here's an idea that's been swishing in my head too; Something like D&D's "Poison a target. creatures poisoned in this way *insert effect*" would be interesting! Example:  "Frozen Hollybomb: bundle of toxic berries with a heat-sucking venom. Throw to inflict 1 Harm & +1 Venom. Triggering a Venom clock with this immediately triggers the target's Ice clock unless it's ice-immune."

P.S. if this gets another content update, i'd die for more ranged weapons (A 2nd music weapon or another "unique type" weapon would be neat as well but that's like minimum priority imo).

That's a real slick idea! Hmm, I might steal that, cuz that might make for a really cool environmental effect. I'm working on MONSTER GUTS: DARK right now, which'll be a DS-themed expansion for the game and include a couple weirdo quasi-ranged weapons, so keep your eyes peeled for that (if you follow me on Twitter, you won't miss it).

But also, you're more than welcome to write stuff up for MONSTER GUTS! There've been a number of amazing people who've created supplements for the game, and I'm always delighted when another joins their number.

An MG video game. It would require way too much work, luck & changes to the ruleset & there's really just no chance for that to ever happen in a million worlds, but goddamit that idea is gonna haunt me forever because that would be sick! (Also the 1st fire lance move would be really fun to use in VG format)

What if the "special clocks" stacked? E.g. party of 3, each with 1 hollybomb & a second variant hollybomb, decide to rush the venom clock, throwing all 6 hollys & triggering the special extra powers of all 3 variants instead of deciding which one finishes the clock & gets the effect.

Bloodsharp: gain 1 edge when you or Close entities deal or take Harm

Hey this game looks absolutely amazing, I commend you for turning monster hunter into a ttrpg so well just from reading the quickstart. Are there going to be any community copies available?

Thank you so much! You know, yes, there will be community copies available. I'll set them up right now.

You are awesome! Thank you

I am very excited to bring this to my gaming group!  I'm an avid Monster Hunter fan, and this fits the bill for a ttrpg version perfectly.

I did have a few questions about the mechanics, and wasn't sure how to reach out for answers. Should I post those questions here as a comment, or is there another way to contact you?

Hi! I'm so glad to hear that! Here is fine. You can also find me on Twitter, @ostermad.

1. When making a basic weapon attack, how do you determine the Harm inflicted? Some of the weapons have Harm listed, while others only specify the tags.

2. How does the Reload tag function? Does it require a Move or a full Action, and how often? Is the need to reload only triggered on a Mixed Success, or does every other turn need to be spent reloading the weapon?

3. How do element or effects (Bleed, Venom, Slime, Fire, Stun, Metal, Ice, Snooze, Water, Shock) affect scavengers? Some monsters have attacks that inflict them, but I could only find rules on how those elements/effects work against monster clocks.

4. Is there any way to remove Blisters after they are incurred, or is that weapon just lost to you after you get too many?

5. If you use several different weapons, is there a way to transfer any tags you've accrued between weapons, or are they tied to the weapon you first put them on?

6. What is the stunned condition for scavengers?

7. When monsters are enraged, are those modifiers cumulative until they are defeated, or do they only last throughout the end of the Bout?

8. If afflicted with a status ailment with a persistent effect (such as Bleed or Venom), does the effect trigger at the start or end of the afflicted's turn?

9. If there are multiple beasts or monsters involved in a Bout, how is their turn order determined?

10. Can the listed beasts be found in any environ?

11. Are there any plans to add other monsters than the four that are listed in the document (or have you already made others that can be found elsewhere)?

12. Do you have any guidelines on building monster stat blocks for homebrewing a monster? Specifically, determining Health values for its body/parts, and how much Harm they inflict (though any other advice would be welcomed as well).

13. Is there an official stat block for the icy roly-poly monster you guys fought in the Top Shelf stream?

Sorry for the huge list; I am really excited to run this for my group, and just wanted to make sure I understood how it works. Thank you for making an amazing game!

Great questions! I think for visibility to folks beyond just you, I'll write my answers up in a forum post either today or tomorrow.

That would be awesome!  I'm a bit new to the forums, so would you be willing to drop a link to the post here as well?

I had one other question for when you make your post: What is the difference between the Beast, Behemoth, and Brute tags?

Hey there, just checking back in on this.  I gave the rules a test spin on my own with two scavengers and had a blast!  I also had some more questions that I would love to ask once you get the forum post up and running.

Yeah, sorry! Had a bunch of bad brain days. While I know there is a forum functionality, I'm not finding how to enable it, so I'll write up a Devlog tomorrow (i.e. not on Shabbos) with that info. Thank you for your patience!

MONSTER GUTS does such a wonderful job of preserving the pace and style of Monster Hunter! I adore it - it's a game made with a lot of thought and attention. Definitely worth your time.

Put simply, MONSTER GUTS is awesome. Using the LUMEN system, it's blazing fast and super easy to pick up and get into. Each weapon plays differently, and with the tag system for equipment, you can keep changing things up so nothing gets stale. All this without ever getting too complex.

I can't wait to see a supplament chalk full of new monsters to hunt!

I've had an absolute blast with MONSTER GUTS so far! Had the chance to play the War Bugle, which is a really fun buff/support style weapon-class that really holds its own with the other options!

Really love how the monster hunts and fights themselves are structured. The system gives a great feel of going up against a single, big, dangerous monster without combat feeling like a slog against a damage sponge.

The tag system in place for rolling for new gear as you scavenge monster parts is also super good and adds a great layer for replaying hunts and customizing your weapons and gear.

MONSTER GUTS is super easy to pick up and get started hunting some cool as hell monsters in a post-apocalypse Pacific Northwest. I've never played any Monster Hunter games, but if I do, I hope they're as cool as MONSTER GUTS.

11 Scavenged Monster Claws out of 10.

I've had so much fun with this so far! It's quick, it's gutsy, it's light. Pick up another weapon and everything changes. In playtest, we went from never having played anything in LUMEN to scooping out some monster guts in 90 minutes, and we were hungry for more. Kingdom Death meets Monster Hunter in a tight tabletop! I'm hooked.

I've had a chance to do some playtesting with this game, and it's a blast! Stuff with the monster fighting is tactical and stimulating, and there's room for as much or as little RP between characters as you feel comfy with. Overall, I highly recommend this game if you're looking for a monster battling game and wanna have a chill time with your friends! 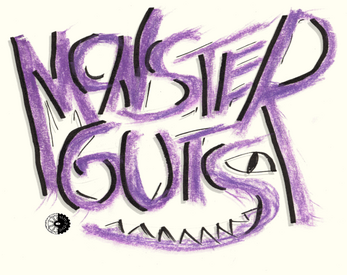 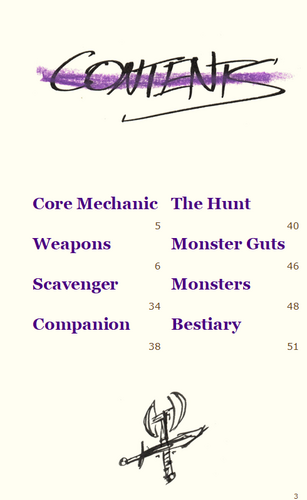 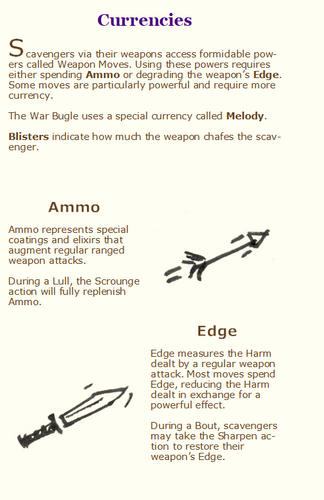 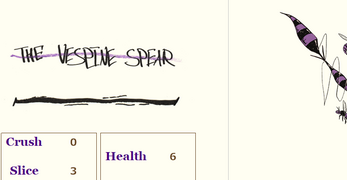